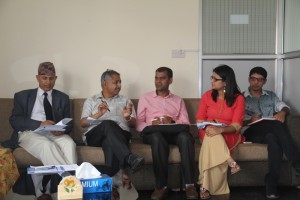 CMF Executive Director Bimal Gautam briefed new member of the Advisory Committee, Usha Nepal, ex-Commissioner at the Election Commission, about the objectives of the STREAC project and also informed them about fellow consortium partners: SODEC, NCCR and ODC.

Emphasising on the project’s coordination with anti-corruption agencies, Gautam said that the Committee will guide project activities.

The members discussed on pre- and post-test questionnaires to be administered to college-going students in campus outreach programme and provided their reactions and inputs to the questions.

Committee member Madhab Paudel said that questions about Commission for Investigation of Abuse of Authority and Special Court too should be incorporated to raise students’ awareness about these anti-corruption bodies. 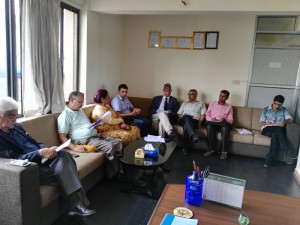 Another member Niranjan Baral suggested that media’s attitude in covering corruption should be featured in TV and radio programmes.

Earlier, Project Coordinators Prakash Ghimire and Sharada Rijal had briefed the members about project activities for the next quarter and requested them to give suggestions.